Nicholas KadzunguraBorn in 1967 in Centenary

Kadzungura completed his “O” levels in St. Albert’s Secondary School in Centenary before being apprenticed to Damian Manuhwa, the famous first-generation artist. From the beginning, this young artist was inspired by the natural shapes of the stones as they appeared from the quarries. These forms continue to influence him. Kadzungura only works in harder stones, preferring Springstone, Marble and Verdite. In 1997, Kadzungura was chosen for the Chapungu Resident Artist Program, where he continues to work. His subject is comprised mainly of groups of people-often-children singing, in prayer, in discussion, or in mourning. There is a tenderness and often a sense of poetry in these gentle images. 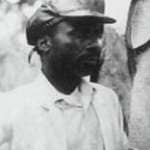