“The Western world has long borrowed from Africa. I find no problem in borrowing from them”, argues Tapfuma Gutsa, while creating works such asTribute to Matisse. He regards himself as an international artist with African roots, whose inspiration is drawn from sources worldwide. Sometimes politically charged, his work is also capable of great poignancy. Tapfuma Gutsa is acknowledged as the leader of the second generation of artists and is much admired for his support of many young artists. In1997, his one-man exhibition in the National Gallery of Zimbabwe was regarded as the finest in many years. 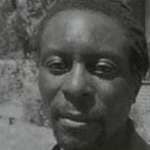